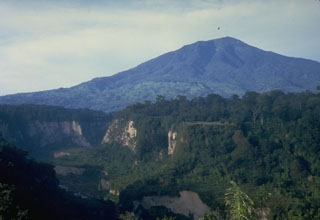 
Seismic activity at Tandikat increased significantly over the week of 20-26 January 2003. One felt earthquake (III on the MMI scale) on 20 January was followed by a significant number of deep volcanic earthquakes. The number of both volcanic and tectonic earthquakes resulted in the volcano's hazard status being upgraded to Alert Level 2 on 25 January. Seismic activity decreased over the period 27 January-16 February (table 1), but remained at an elevated level.