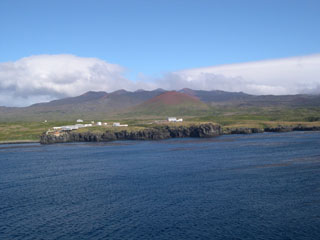 
A small volcanic eruption was observed on 24 June 2004 by a member of the South African National Antarctic Programme's (SANAP) over-wintering team on Marion Island (figure 1). While conducting fieldwork in a mountainous area on the S part of the island, David Heddings was able to video an eruption that comprised gas and small pieces of scoria (a few centimeters in diameter).

While it has been assumed that small volcanic eruptions often take place on Marion Island, the remoteness and hilly terrain over much of the island has meant that such events have not been witnessed. The last confirmed eruption on Marion took place in 1980 when ornithologists found a fresh basaltic lava flow on the W side of the Island.