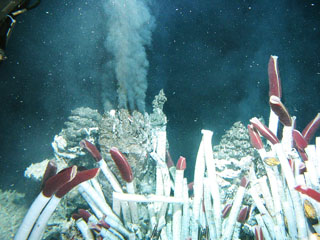 
Along the fast spreading East Pacific Rise (EPR) crest near 9°50'N, Cowen and others (2007) reported on additional evidence regarding recent volcanic eruptions spanning about 4-5 months of activity discovered in April and May 2006. In April 2006, during routine recovery and redeployment of ocean-bottom seismometers (OBS) at the EPR R2K Integrated Study Site (ISS) near 9°50'N, eight of 12 OBS could not be recovered (BGVN 31:11). Anomalous turbidity and temperature in the water column along the ridge axis confirmed scientists' suspicions that the OBS were trapped by a new lava flow. A resurgence in magmatism had been postulated recently, based on temporal changes observed over the past few years in hydrothermal vent fluid chemistry and temperatures (Von Damm, 2004) and increasing microseismicity (Tolstoy and others, 2006).

According to Cowen and others (2007), within a week of the initial bottom-water surveys in late April, scientists mounted a rapid response expedition on board the research vessel RV New Horizon. The expedition surveys included conductivity-temperature-depth (CTD) observations, optical tow-yos (tows during which a package is alternately lowered and raised), hydrocasts, and towed digital-imaging along the EPR axis between ~ 9°46'N and 9°57'N.

These surveys confirmed the occurrence of recent seafloor eruptions along more than 15 km of the ridge axis and up to ~ 1 km off axis. They documented widespread vigorous hydrothermal venting and a notable absence of vent megafauna (figure 6). Many of the hydrothermal vents studied over the past 15 years were disrupted. A prior eruption occurred in 1991-1992 (e.g., Haymon and others, 1993) along portions of the same segment of the EPR. This is the first repeat eruption documented at the same location along the mid-ocean ridge (MOR) crest.

Toomey and others (2007) discussed how mantle upwelling is essential to the generation of new oceanic crust at mid-ocean ridges, and concluded that such upwelling is asymmetric beneath active ridges. In their article, the authors used seismic imaging to show that the isotropic and anisotropic structure of the mantle is rotated beneath the East Pacific Rise. The isotropic structure defines the pattern of magma delivery from the mantle to the crust. They found that the segmentation of the rise crest between transform faults correlates well with the distribution of mantle melt. The azimuth of seismic anisotropy constrains the direction of mantle flow, which is rotated nearly 10° anticlockwise from the plate-spreading direction. The mismatch between the locus of mantle melt delivery and the morphologic ridge axis results in systematic differences between areas of on-axis and off-axis melt supply. The authors conclude that the skew of asthenospheric upwelling and transport governs segmentation of the East Pacific Rise and variations in the intensity of ridge crest processes.