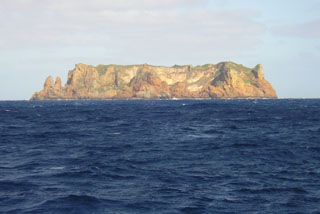 
Olivier Hyvernaud reported that recent T-phase waves, recorded by the Laboratoire de Géophysique in Tahiti, originated from near Curtis Island (figure 1) and had waveforms suggesting a volcanic origin. The first of these hydroacoustic waves recorded on the Polynesian seismic network were a brief swarm of seven short strong events on 17 January 2009. On that day the network received the signals between 1706 and 1717 UTC. In addition, a single event was received 19 January 2009 at 0753 UTC. The best preliminary location for these events was 30.49°S, 178.55°W, a position 5-6 km NNE of Curtis Island and well within the area of the larger caldera structure.

On the New Zealand GNS Science website there is a brief discussion and two photos of Curtis Island, noting a short visit there, thermal activity, nearby mineral-rich volcanoes, and that it lies adjacent to a chain of submarine volcanoes (eg. Smith, 1988). They also stated "The benefit in studying this remote outcrop is the insight it gives into the composition of these underwater vents, while being relatively straightforward to measure in comparison."

On 1 April 2009 Brad Scott (GNS) added that they were not aware of any activity at this time. The island is remote and GNS personnel do not visit on a regular basis. The activity on the island is solfataric. He also noted that the island is composed of pyroclastic-flow (ignimbrites) deposits from an unknown nearby source.

No thermal alerts have been measured by the MODVOLC system for Curtis Island since at least the beginning of 2004 and through 1 April 2009.

Geological Summary. Curtis and nearby Cheeseman Islands are the emergent portions of a submarine volcano astride the Kermadec Ridge. The age of the small islands are considered to be Pleistocene, and rocks consist dominantly, if not entirely, of andesitic pyroclastic-flow deposits (Lloyd, 1992). Curtis Island, only 500 x 800 m in diameter, contains a large, fumarolically active crater whose floor is only 10 m above sea level. Reports of possible historical eruptions probably represent increased thermal activity. Geologic studies have documented a remarkable uplift of 18 m of Curtis Island during the past 200 years, with 7 m of uplift occurring between 1929 and 1964 (Doyle et al., 1979). An active submarine magmatic or solfataric vent is believed to exist nearby, but its activity cannot unequivocally be associated with the volcano (Lloyd, 1992).