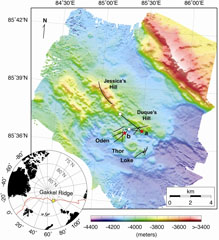 Bulletin of the Global Volcanism Network, vol. 34, no. 5 (May 2009)
Managing Editor: Richard Wunderman.


A sonar survey in 2001 along the ultraslow-spreading Gakkel Ridge (formerly known as the Nansen Cordillera and Arctic Mid-Ocean Ridge) by the USS Hawkbill submarine and the U.S. Coast Guard icebreaker Healy revealed two previously undiscovered volcanoes beneath the pack ice of the Arctic Ocean (BGVN 26:03). In July 2007, a research team led by Woods Hole Oceanographic Institution (WHOI) uncovered evidence of explosive volcanic eruptions in the same area of the seafloor.

At a depth of ~4 km, researchers found fresh, unweathered, jagged, glassy fragments of rock (pyroclastic deposits) spread out over an area of ~10 km2 around a series of small volcanic craters on the Gakkel Ridge (figure 1). According to WHOI geophysicist Rob Reves-Sohn, chief scientist of the expedition, as quoted in the 14 August 2008 issue of Oceanus, "These are the first pyroclastic deposits we've ever found in such deep water, at oppressive pressures that inhibit the formation of steam, and many people thought this was not possible. This means that a tremendous blast of carbon dioxide was released into the water column during the explosive eruption." Although no speculation was made by the scientists as to the age of the eruption(s) that caused these pyroclastics, the fresh nature of these surficial materials argue to their recency.

According to Cochran (2008), the Gakkel Ridge is the slowest spreading portion of the global system of mid-ocean ridges. Total spreading rates vary from 12.8 mm/year near Greenland to 6.5 mm/year at the Siberian margin.

A recent article by Sohn and others (2008) concerning the July 2007 expedition noted that roughly 60% of the Earth's outer surface is composed of oceanic crust formed by volcanic processes at mid-ocean ridges. Although only a small fraction of this vast volcanic terrain has been visually surveyed or sampled, the available evidence suggests that explosive eruptions are rare on mid-ocean ridges, particularly at depths below the critical point for seawater (a depth of ~ 3,000 m). A pyroclastic deposit has never been observed on the sea floor below 3,000 m, presumably because the volatile content of mid-ocean-ridge basalts is generally too low to produce the gas fractions required for fragmenting a magma at such high hydrostatic pressure. Liu and others (2008) reported on recent analyses of many major and trace element collected from Gakkel Ridge.

The July 2007 expedition acquired photographs and video images of 'zero-age' volcanic terrain along the ridge and beneath the ice-cover ocean's surface. The axial valley at 4,000 m water depth was blanketed with unconsolidated pyroclastic deposits. Those included bubble-wall fragments (limu o Pele, also know as Pele's seaweed?fragments of large glass bubbles that shatter into pieces of curved, paper-thin, bubble walls), covering a large (greater than 10 km2) area (figure 2). At least 13.5 weight percent CO2 is necessary to fragment magma at these depths, which is about tenfold above the highest values previously measured in a mid-ocean-ridge basalt.

Sohn and others (2008) note that these observations raise important questions about the accumulation and discharge of magmatic volatiles at ultraslow spreading rates on the Gakkel ridge. They also demonstrate that large-scale pyroclastic activity is possible along even the deepest portions of the global mid-ocean ridge volcanic system.

Geological Summary. During January-September 1999 global seismic networks detected an earthquake swarm along the East Gakkel Ridge (near 86°N, 85°E). Sonar mapping in May 1999 identified a cone at the western end of a line of volcanoes that corresponded to the average location of the epicenters (Edwards et al., 2001). A survey in July 2007 (Sohn et al., 2008) provided detailed bathymetry and named selected features, including the Oden (location of the 1999 seismicity), Thor, and Loke cones. Both Oden and Loke were covered with a light dusting of pyroclastic material, which was also found throughout the survey area, thought to be products of an eruption during the 1999 swarm.