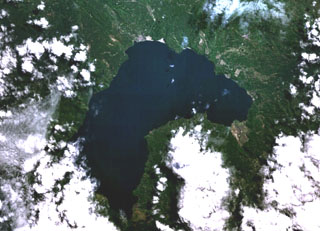 
This report on Ranau, a Pleistocene caldera that lies along the Great Sumatran fault, is based on accounts of fish kills, including one on 4 April 2011. The fish died near hot springs in Lake Ranau, a large caldera lake, and their deaths were attributed to seismically induced H2S releases by the Center of Volcanology and Geological Hazard Mitigation (CVGHM). CVGHM reported the surface area of Lake Ranau to be ~127 km2, and noted that the Lake Ranau complex is geothermally active, with hot springs that emerge at the foot of Mount Seminung on the banks of Lake Ranau. In addition to the 2011 event, fish kills have been recorded in Lake Ranau (figure 1) for the past five decades (table 1).

Table 1. Previous fish kills in Lake Ranau reported during the past five decades. (Note that there is no mention of any correlation between seismicity and geochemical anomalies.) Courtesy of CVGHM.

Reports stated that the 4 April 2011 fish kill was large in scale. According to the head of a nearby village, Sugih Sane, the event began with turbulent water in Lake Ranau that lasted for approximately 30 minutes. Local residents reported that the fish kill occurred during a relatively short time in portions of the lake surrounding hot springs. At the time of the incident, the water in the affected areas appeared milky white, and wind spread the smell of sulfur to surrounding areas.

Geochemistry. Scientists conducted field work near the three hot springs Kota Batu, Ujung, and Way Wahid during 16-19 April 2011. At that time they reported the following: No dead algae were found on the lake's surface. There was no smell of sulfur, the water was clear, and the water around the hot springs was bubbling and warm. * Dead fish were no longer present. The pH of the lake water was 7.74, and the temperature was 26.1°C. The water near the hot springs had a pH of 6.32-7.06, with a temperature of 47.8-62°C. The water of the river that empties into Lake Ranau (input) had a pH of 8.07-8.10, and the lake water discharge (output) had a pH of 7.86. The result of ambient gas examination showed no gases associated with magmatic gases, such as CH4, CO2, CO, and H2S, in the vicinity of the hot springs discharge. The degree to which the above measurements were anomalous was unstated.

Seismicity. Seismic data recorded during 16-20 April 2011 showed microearthquake activity around Lake Ranau. The earthquakes were located along a fault line oriented in the SE-NW direction along Lake Ranau, at depths of 0.6 and 10 km below the surface of the lake. The Berkelulusan location coincides with the location of the Kota Batu hot springs. Prior to the fish kill at Lake Ranau on 4 April, an M 5.1 earthquake was recorded on 29 March 2011 in Bengkulu, ~160 km W of Lake Ranau.

Cause of the fish kill. CVGHM concluded that, based on the results of the field work (location of dead fish near hot springs, sulfur smell carried by wind up to 3 km away, absence of dead algae, and changing color of the lake water to milky white during the event), the fish kill in Lake Ranau was caused by the release of H2S gas into the lake water, which caused imbalances in lake water chemistry. They said that hydrothermal gas was trapped over time and escaped to the surface after the pressure due to tectonic disturbances. CVGHM concluded that the M 5.1 earthquake in Bengkulu on 29 March 2011 led to increased pressure on the fault in the vicinity of Lake Ranau; then, H2S gas was released to the surface in the vicinity of the hot springs. According to CVGHM, the occurrence of microearthquakes is a result of the fault in the vicinity of Lake Ranau, and are neither dangerous nor destructive. However, CVGHM asked residents to report future fish kills to the local government.

Geological Summary. Ranau is an 8 x 13 km Pleistocene caldera partially filled by the crescent-shaped Lake Ranau. The caldera lies along the Great Sumatran Fault that extends the length of Sumatra. Incremental formation of the caldera culminated in the eruption of the voluminous Ranau Tuff about 0.55 million years ago. A morphologically young post-caldera stratovolcano, Gunung Semuning, was constructed within the SE side of the caldera to a height of more than 1,200 m above the lake surface. The volcano has not been mapped in sufficient detail to determine the age of its latest eruptions, although fish kills and sulfur smells in the late 19th and early 20th centuries may be related to volcanism.