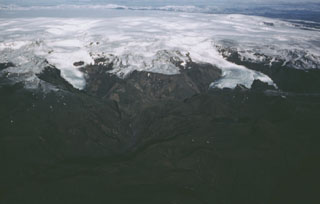 
Microseismicity preceded and accompanied a jökulhlaup (a glacier-outburst flood) on 9 July 2011, as reported by the Iceland Met Office (IMO). The jökulhlaup escaped from under Mýrdalsjökull, the glacier that rests above Iceland's Katla volcano, its 10 x 14 km caldera, and environs (figure 4). IMO reported that microseismicity was registered near several ice cauldrons in the caldera for a few weeks prior to the event (figure 5). Peak harmonic tremor on 8 July coincided with rising water levels and increased water conductivity, as measured by the main flood gauge (figure 6; gauge is at red triangle on figure 4).

IMO reported that, on the same day, the main flood gauge was damaged when flood waters reached the instrument near midnight; another station, normally not in the water, started recording rising water around 0400 on 9 July, and the water level there rose 5 m within 5 minutes (figure 7). When the flood reached the main road approximately one hour later, the main bridge over the Múlakvísl river was destroyed and the road was closed (red triangle, figure 41).

According to the news source Morgunblaðið, 200 people were safely evacuated, and allowed to return to their homes by that afternoon. Morgunblaðið reported that analysis of the flood waters indicated that the flood was caused by geothermal water, but that a sub-glacial eruption at Katla could not be ruled out. IMO stated that the harmonic tremor declined on 9 July, following the jökulhlaup event. After observational flights, new cracks and cauldrons were reported in the ice of Mýrdalsjökull glacier (figure 8).

By 16 July, the National Commissioner of Icelandic Police in the Department of Civil Protection and Emergency Management reported that a new bridge had been built to replace the bridge destroyed in the jökulhlaup (figure 9).

August-December seismicity. IMO reported increased seismicity under Mýrdalsjökull in October (figure 10). They reported that 512 earthquakes occurred, with ~ 380 originating within the Katla caldera; a large portion (nearly 100) of those 512 earthquakes occurred on one day near the beginning of October (figure 11). The largest reported earthquake was M 4, with seven being larger than M 3. On 8 November, an M 3.2 earthquake that originated in the S most part of the caldera was felt by residents in the town of Vík.

Overall, following the July 2011 jökulhlaup event, seismicity has increased above background levels of the past year. The seismic peak is noticeable with respect to the number of earthquakes, their largest magnitudes, and the clustering under Katla (figures 10 and 11). The largest earthquakes were as large, or slightly larger, than the other earthquakes of M 3 or greater in earlier episodes of unrest (i.e., 1999 and 2002-2004, figure 10). The bulk of the 2011 seismic increase occurred over a shallow depth range (within 4 km of the surface, figure 12).

Television filming sparks eruption fears. The Iceland Review reported that, in the early morning of 9 December, the Icelandic emergency hotline received calls from residents reporting bright lights on the slopes of Mýrdalsjökull. Callers feared that an eruption had started at Katla. The bright lights had also been noticed on a webcam by observers in Norway, who also enquired if there was an eruption. When the glacial slopes were inspected to find the cause of the lights, it was discovered that they were from film crews for the HBO series "Game of Thrones", who were filming in the early morning to capture the desired light conditions.