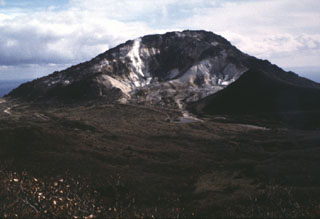 
E-san is located in S Hokkaido, the northernmost of Japan's 47 prefectures (figure 1). Recent monthly reports of volcanic activity from the Japan Meteorological Agency (JMA), translated into English, resumed in October 2010. The only recent JMA report on E-san was in March 2012. This is the first BGVN report discussing E-san.

According to JMA, in March 2012 steam plumes rose to heights of less than 100 m above the crater rim. Aerial visual and infrared observations coducted in cooperation with Japan's Ministry of Land, Infrastructure, Transportation, and Tourism, and the Japan Coast Guard on 16 and 23 March, repectively, found no changes.

A small-amplitude and short-duration volcanic tremor occurred on 30 March. After that, the number of small volcanic earthquakes increased until early on 31 March. No steam plumes could be observed on 31 March due to cloud cover; however, JMA reported no change in air vibrations or crustal deformation data. Field surveys on 2 April found no change in either the steam plumes from the crater or crustal deformation (GPS).

Geological Summary. Esan, a small volcanic complex of seven overlapping andesitic-to-dacitic lava domes, is Hokkaido's southernmost active volcano. Esan occupies the eastern tip of the double-pronged Oshima Peninsula across the Tsugaru Strait from Honshu. The Esan volcanic complex consists of five late Pleistocene and two early Holocene lava domes, Esan and Misaki. A minor phreatic eruption in 1846 produced a mudflow that caused many fatalities. The latest activity was a small eruption in 1874. Active fumaroles occur at a thermal area on the upper NW flank.