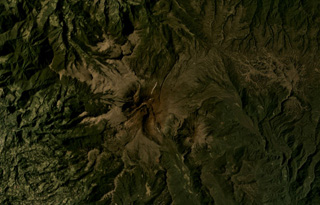 
Sotará is considered a recently-active volcano within the Sotará volcanic complex described by the Instituto Colombiano de Geología y Minería (INGEOMINAS) as a caldera with resurgent volcanism. Two volcanoes developed within the caldera, Sotará in the center and Cerro Gordo on the S edge (figure 1). Two smaller volcanic peaks, Cerro Negro and Cerro Azafatudo, have been identified on the NW flank of the caldera and described as pre-Sotará features. Monitoring efforts by INGEOMINAS's Popayán Observatory, beginning in 1993, documented persistent seismicity, active fumarolic sites, and thermal springs. Historic eruptions (within 500 years) have not been observed from this complex.

Expanded monitoring efforts. The INGEOMINAS observatory based in Popayán (37 km NW of Sotará) began monitoring volcanic activity at Sotará in 1993. A seismic station was installed on the NE flank of the volcano that year and in 1995, significant seismicity was detected by that station. A temporary seismic station was added to the area in 1995 and by 2007, the monitoring network was expanded with permanent stations. In August 2012 the network contained eight geophysical stations that included short period and broadband seismic stations, electronic tiltmeters, a webcamera, and electronic distance meter (EDM) measuring sites (reflectors and benchmarks) (figure 2).

Since monitoring began in 1993, the largest earthquake that occurred in this region had a local magnitude (ML) of 4.4 with an epicenter 16 km NW of Sotará. INGEOMINAS recorded the event at 1537 (local time) on 6 June 2010 with a focal depth at 6.9 km. The shaking caused by this earthquake was reported in six communities located as far as 20 km N of the epicenter. There were five aftershocks with magnitudes ranging 0.5-2.6. One of these aftershocks, occurring at 1555, was felt in two towns, Chapa and Coconuco (located 5.5 km NW and 15 km N of the epicenter, respectively). The last aftershock (ML 2.4) was recorded on 7 June with a 6-km focal depth and epicenter 22.7 km NW of the volcano.

INGEOMINAS reported low levels of seismicity from January 2010 through May 2012 (table 1). Volcano-tectonic (VT) earthquakes occurred more frequently than long period (LP) events or events interpreted as rockfalls (RF). VT hypocenters were calculated for 1-14 earthquakes per month except during October 2011, when 50 VT events were located within the Paletará Valley (see subsection Paletará Valley seismicity for details). From 2010 through May 2012, local magnitudes were rarely greater than 2.

Paletará Valley seismicity. Beginning in January 2010, INGEOMINAS reported earthquakes frequently occurring within the Paletará Valley. In a roughly circular region ~5 km in diameter, VT earthquakes clustered at a distance 15-25 km NE from Sotará's edifice (figure 3). Many of these events were too small to locate (ML

In 2011, relatively large earthquakes were detected in October and December within Paletará Valley. INGEOMINAS reported elevated seismicity that began on 14 October at 1423. Low magnitude events, characterized as rockfalls, were also recorded on 14 October. Over the next 24 hours, ~38 earthquakes were recorded and by the end of the month, 54 VT earthquakes were registered with epicenters within ~7-10 km NE of Sotará. Local magnitudes ranged from 0.1-2.7. INGEOMINAS announced in a 15 October assessment that seismicity had not affected the Sotará volcanic system and communities located near the volcano were not at risk.

Seismic unrest in 2012. In early 2012, ~6 earthquakes were located per month and epicenters tended to cluster NE of the edifice (table 1). In April 2012, several earthquakes also appeared ~10 km SW of Sotará. From January through May 2012, VT earthquakes (no LPs occurred) were shallow (0.5-2 km), however, due to small magnitudes (ML 0.5-2.1), the events did not cause noticeable shaking in local communities.

Seismicity decreased by 30 June; however, on 25 July, numerous VT events were registered. By 31 July, 1,232 VT earthquakes had been detected (575 of which were located), 2,295 events were detected but not classified, and nine LP events were detected. Epicenters were dispersed in a larger zone NE of the summit, however, magnitudes and depths were similar to those detected during the previous month.

A site visit conducted by INGEOMINAS in July included the NW sector of Sotará where hot springs were located. Investigators measured temperatures and assessed the geochemistry of the springs and determined that no significant changes had occurred.

Increased seismicity persisted in early August 2012 and by 8 August, INGEOMINAS reported that, on average, 150 earthquakes were occurring per day (figure 4). In a special bulletin, INGEOMINAS assessed the seismicity and also highlighted new conclusions from the tiltmeter network. They noted that from January 2010 through July 2012, no deformation was detected by the electronic tiltmeters. By early August 2012, an inflation trend was detected in the NE sector that was potentially linked to the cluster of earthquakes in the immediate area. No significant trends were interpreted from the SW sector. On 8 August 2012, INGEOMINAS announced that the Alert Level was raised to III (Yellow; "changes in the behavior of volcanic activity"), or the second lowest level.

Geological Summary. Volcán Sotará, also known as Cerro Azafatudo, is an andesitic-dacitic stratovolcano about 25 km SSE of Popayán city in southern Colombia, SW of Puracé volcano. Three calderas, 4.5, 2.5, and 1 km in diameter, give the summit an irregular profile. No historical eruptions are known, though there is current fumarolic and hot spring activity.