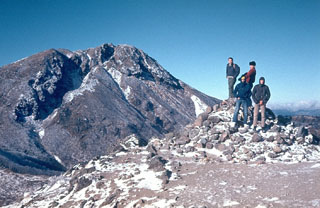 
This is our first report on Nikko-Shirane (also known as Nikko-Shiranesan). The volcano is located in the Nikko National Park in central Honshu, the main island of Japan (figures 1 and 2).

According to the Japan Meteorological Agency (JMA), after the massive 11 March 2011 MW 9.03 earthquake off the Pacific coast of Tohoku (38.297°N, 142.372°E), seismicity briefly increased 5-10 km E and SE of Nikko-Shirane at a depth of about 5 km W and NW. On 9 April 2011, an M 3.5 earthquake occurred about 5 km W of the summit, followed by several aftershocks. On JMA's earthquake intensity scale, the M 3.5 earthquake ranged from 1 (felt slightly by some people in quiet environments) to 3 (felt by most people in buildings and some people walking; many people awoken). (JMA's earthquake intensity scale is explained on their website.)

In May, two small earthquakes occurred NW of the volcano. Afterward, seismicity gradually declined through December 2011, although several additional small earthquakes through September 2011 were felt in nearby Nikko city, about 4-5 km E of the summit. No volcanic tremor or fumaroles were observed. No changes were also noted during a 2 November 2011 field survey.

The next JMA-translated report on Nikko-Shirane, in February 2013, noted that volcanic seismicity remained low. However, on 25 February an M 6.3 earthquake occurred, the hypocenter of which was 10 km NNE of the summit and 3 km below sea level. The earthquake's maximum seismic intensity on JMA's scale was 5+ in Nikko City (scale of 5 indicates that many people find it hard to move and walking is difficult). Aftershocks with maximum seismic intensities between 1 and 4 on the JMA scale continued until 28 February, when seismicity declined. This seismicity was not accompanied by volcanic tremor, fumarolic activity, crustal deformation, or any other volcanic activity.

Geological Summary. Nikko-Shiranesan is a relatively small, 2578-m-high andesitic volcano consisting of a group of four lava domes resting on a shield volcano that rises to the NW of scenic Lake Chuzenji in Nikko National Park. All historical eruptions, recorded during the 17th-20th centuries, have consisted of phreatic explosions from Shiranesan, the youngest lava dome. Viscous lava flows with prominent levees from the underlying shield volcano Keizukayama were responsible for the formation of several scenic lakes north of the volcano.