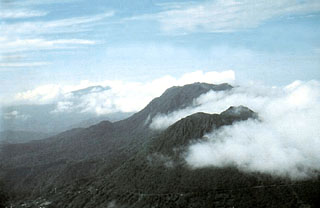 
The trend of decreasing earthquake frequency reported last month did not continue into early May nor did the apparent trend toward increasing focal depths. Seismographs recorded 1-3 events per day in early May with depths of 1.2-2.2 km. Scientists from the University of West Indies' Seismic Research Unit have continued monitoring the activity with a telemetered network.