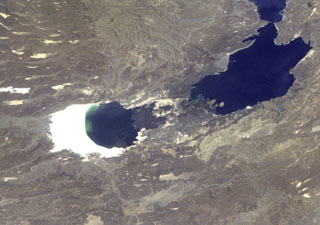 
The eruption of Ardoukoba began on 7 November. During the preceding 24 hours, about 800 earthquakes M < 3.3 had been recorded. These events occurred at the end of the Ghoubbat al Kharab (figure 2), just S of the rift and ~6 km SE of the eruption site.

After a brief period of gas emission, lava fountaining began from a 500-m-long, newly opened fissure. Three spatter cones formed on this fissure, but the primary activity soon shifted about 1/2 km to the SE. For the first 2-4 hours as much as 0.5 x 106 m3 of lava was extruded per hour, but the extrusion rate declined rapidly and by the 5th or 6th day had decreased by an order of magnitude.

By 9 November, only the main vent was still active. A cone (named Gira-le-Koma) about 30 m high, 200 m long, and 25 m wide, with a 60° external slope, had formed around this vent, which contained a small lava lake. On 13 November the level of the lava lake dropped rapidly, then the lake disappeared. Scoria and bombs were ejected briefly before the eruption ended on 14 November.

The total volume of lava emitted was estimated to be at least 12 x 106 m3. Lava covered an area of slightly more than 3 km2. Flow thicknesses reached 25 m but usually ranged from 1 to 2 m. About 25 fissures, parallel to the NW-SE trend of the rift, opened during the activity. Most fissures were from 1-2 mm to about 1 m wide, but there was one short segment of 3 m width. Many of the fissures also showed a component of normal movement, with scarps up to 1/2 m high.

Further References. Abdallah, A., and others, 1979, Relevance of Afar seismicity and volcanism to the mechanics of accreting plate boundaries: Nature, v. 282, p. 17-23.

Geological Summary. The Ardoukôba (Asal) Rift in Djibouti, trending NW from the Red Sea, contains a broad area of youthful fissure vents between Lake Asal and the Ghoubbat al Kharab gulf. It is subaerially exposed over 12 km between these two bodies of water and contains numerous basaltic cinder and spatter cones. The silicic centers of Eger Alayta and Asa Aleyta, on the N and S sides, are remnants of a Pleistocene silicic center that has been disrupted and spread apart. Magma-water interaction has produced tuff cones, some of which form islands or are breached by the sea. The most recent lava flows are younger than lake sediments deposited 5,300 years ago. These lavas were thought to have been erupted during the past 3,000 years (Delibrias et al., 1975). The fissure erupted in 1978, producing a small cinder cone and lava flows that covered part of the rift floor near the Red Sea.