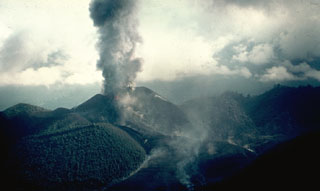 
An eruption of pyroclastics from Mirador, one of the craters in the Carrán volcanic group (figure 1), began at 0200 on [14] April, preceded by local seismicity. The column of gas and ash reached altitudes of 3-4 km, and was accompanied by gas explosions in the mouth of the crater. After about 40 hours, lava began to flow SSW, traveling about 500 m by the 17th. Voluminous ash emission persisted, with explosions occurring every 5 minutes, and local seismicity was continuous. The activity continued to increase through 18 April. Ash covered agricultural land near the volcano. No one has been killed, but authorities have evacuated 125 people from the area.

Geological Summary. The Carrán-Los Venados volcano group includes about 50 basaltic to basaltic-andesite scoria cones, maars, and a small stratovolcano that are broadly aligned along a 17-km-long ENE-WSW trend ESE of Lago Ranco. The volcanic features occupy a low-lying area N of the more topographically prominent Puyehue-Cordón Caulle volcanic chain, and many of the vents are postglacial in age. The Mirador scoria cone and two maars, Riñinahue and Carrán, were formed during eruptions in the 20th century. These historical eruptions were concentrated where the regional Liquine-Ofqui fault zone intersects the alignment of volcanic vents.