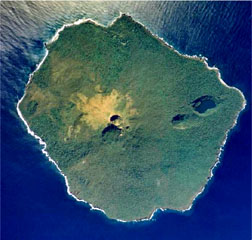 Late (Tonga) Report of ash near the summit proves false


Most of the reported eruption sites were investigated during the 11-18 July cruise of the Fijian research vessel RV Bulikula. An inspection of Late Island, where whitish material thought to be ash reportedly covered the summit cone on 18 and 21 May, revealed no trace of a whitish covering other than scattered patches of white lichen, and no evidence of a recent eruption.

Geological Summary. The 6-km-wide circular island of Late, along the Tofua volcanic arc about 55 km WSW of Vavau, contains a 400-m-wide, 150-m-deep summit crater with an ephemeral lake. The largely submerged basaltic-andesite to andesitic volcano rises 1,500 m from the sea floor, with its conical summit reaching 540 m above sea level. Cinder cones are found north of the summit crater, west and north of a semicircular plateau 100-150 m below the summit, and on the NW coast. A graben-like structure on the NE flank contains two large pit craters, the lower of which is partially filled by a saltwater lake. Eruptions from the NE-flank craters produced explosive activity and possible lava flows in 1790 and 1854.