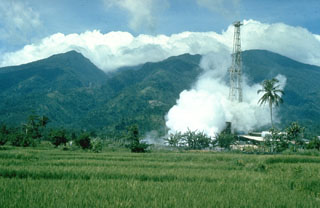 
A small phreatic explosion took place on 29 July from one of the pools of hot water in the Naglagbong thermal area, Tiwi geothermal field, at the E foot of Malinao. The explosion ejected hot mud and blocks up to 2/3 m in diameter. The ejecta reached heights of 150 m and fell as much as 350 m from the vent. One person received second-degree burns and two buildings were damaged, one a COMVOL seismic station.

Before the explosion the pool was 15 m in diameter and 4.3 m deep, with clear emerald-green water at a temperature of 85°C. As early as 6 July, the seismograph recorded unusual microseisms. Two hours before the explosion, geysering of muddy water was observed.

[The minor explosion from the Naglabong thermal area that ejected blocks in 1980 was probably due to water drawdown during development of the Tiwi geothermal field (Newhall, 1994, pers. comm.).]

Geological Summary. Forested Malinao stratovolcano, NNW of Mayon, contains a large summit crater that is breached to the east. This Quaternary volcano, also known as Buhi or Takit, was active from about 500,000 to 60,000 years ago (Nielson et al., 1996), but the E flank is the site of Luzon's largest solfataras and hot springs, some of which deposit silicious sinter. A minor explosion from the Naglabong thermal area that ejected blocks in 1980 was probably due to water drawdown during development of the Tiwi geothermal field (Newhall 1994, pers. comm.).