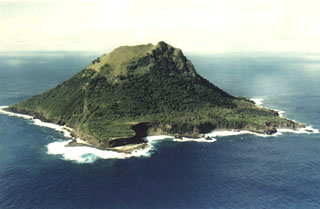 
Seismic activity that began in March 1981 ceased in December. Only a few low-energy events per month have been recorded since. Bathymetric reconnaissance around the island found evidence of an elliptical opening at 1,700 m below sea level on the SE flank, in the same location as the initial events of the earthquake swarm. RSP scientists interpreted the opening as a possible crater and the activity as a magmatic intrusion or eruption.

Geological Summary. The 1.5-km-wide, steep-sided island of Mehetia, the youngest and SE-most of the Society Islands, lacks a well-developed fringing coral reef. The ~400-m-high island (known as Meetia or Meketia in the Tahitian and Tuamotuan languages, respectively) is the summit of a large volcano that rises 4000 m from the sea floor. An older edifice is formed of a lava flow sequence overlain by hydromagmatic deposits and strombolian ejecta. A well-preserved Holocene crater, 150 m wide and 80 m deep, is located NW of the summit and has been the source of the youngest lava flows on the island (Binard et al., 1993). Polynesian legends mention "large fires," and the lack of vegetation on some lava flows suggests that the latest activity occurred within the last 2000 years (Talandier and Custer, 1976). Other recent activity originated from a submarine crater at 2500-2700 m depth on the SE flank.