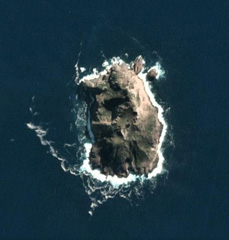 
A Vanuatu Government team visited Hunter Island on 9 March at 1200. White vapor tinged with gray ash billowed to an altitude of approximately 900 m from the main active crater on the W side, and drifted to the W and NW. Fumaroles and two small superimposed craters on the E side were also fuming. Vegetation on the lower slopes of the E coast was burning, which suggested that the eruption had begun recently. By 2200, the fires had reached the central spine of the island and could be clearly seen from the anchorage on the NW coast.

[Later information revealed that human activity had started fires and no eruption had taken place.]

Geological Summary. Hunter Island, the SE-most volcano of the New Hebrides arc, is a small 1-km-wide island consisting of a composite andesitic-to-dacitic cone topped by explosion craters and a lava dome. The island was named after the vessel that discovered it in 1798. A 100-m-deep, steep-sided crater occupies the NW part of the island, which contrasts with the southern cone, whose summit is filled by a lava dome. Several poorly documented eruptions have been noted since the 19th century. Large streams of lava were reported to be pouring from two craters on the eastern side of the island in 1895; the latest eruption apparently took place from the northern tip of the island. Fumarolic and solfataric areas are located at the northern tip of the island and the NE and SE coasts.