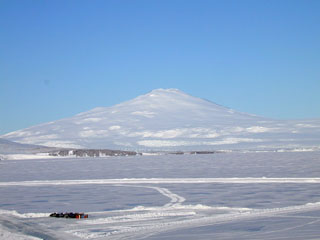 
". . . Observations in December 1972 indicated three main areas of steaming ground in which temperatures as high as 59°C were recorded at depths of 0.25 m. Numerous fumarolic ice towers were scattered throughout the summit area (Lyon and Giggenbach, 1974). Two members of the U.S. Antarctic Research Program climbed the mountain in January 1983. No change was noted in the number, size, and distribution of ice towers and steaming ground from the 1972 reports. Measured ground temperature temperatures were also similar to those in 1972. There was no evidence of any change in the activity over the last 10 years."

Geological Summary. Mount Melbourne is a large undissected stratovolcano along the western coast of the Ross Sea in Antarctica's northern Victoria Land. The 2732-m-high glacier-clad edifice lies at the center of a volcanic field containing both subglacial and subaerial vents along a dominantly N-S trend. A large number of scoria cones, lava domes, viscous lava flows, and lava fields are exposed at the summit and upper flanks. A number of very young-looking cones are located at the summit and on the flanks. Tephra layers are found within and on top of ice layers, and the most recent eruption was estimated to have occurred between 1862 and 1922. The volcano displays fumarolic activity that is concentrated along a NNE-SSW line cutting through the summit area and along a line of phreatomagmatic craters on the southern rim of the summit crater. Prominent ice towers and pinnacles were formed from steam condensation around fumarolic vents.