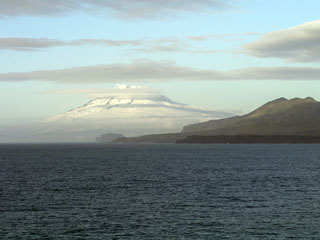 
A NE flank eruption of Beerenberg accompanied by recorded and felt seismicity occurred 6-9 January. First reports indicated that seismic swarm activity began 5 January at 2329 with typical low-frequency volcanic earthquakes. A later report put the start of the swarm at 0044 on the 6th, with 1-4 events, mostly explosions, recorded per minute and said that "normal" earthquakes did not precede the activity. Earthquakes were initially no stronger than magnitude 3, but magnitude 5.4 and 5.0 events were felt at 1122 and 1332 at the Norwegian meteorological station, about 30 km from the summit. Later that afternoon, at 1725, red clouds and smoke were observed above and N of Beerenberg from the meteorological station. Local topography made visual inspection of the volcano impossible. Seismic activity reached a level of about 100 events/hour on the 6th and decreased to about 5 events/hour on the 7th.

At 0645 on 7 January an eruption with lava flows was observed on the N part of the volcano from a commercial aircraft. At 0915, observers in another airplane saw lava entering the sea. At 1009, a thermal infrared image from the NOAA 6 polar-orbiting satellite showed a wispy plume extending about 60 km NE from the N end of Jan Mayen and a bright spot caused by heat from the lava flow. Weather clouds had obscured the volcano the two previous days.

At 1520, scientists from the NVI flew over the eruption and saw an E-W fissure extending into the sea from about 200 m altitude at the NE end of the island, very close to the site of the last lava-producing eruption (1970). The fissure was somewhat less than 1 km long, but during their flight only about 30 m of its length was active, emitting very low lava [spatter] and gas flames. Lava covered an area estimated at 1 km x 300 m and ash about 1.5 km2. A dark ash column rose to a height of about 1 km; the plume was initially blown E, and then curved gently S, extending for several tens of kilometers.

At 1600 on the 8th, personnel from the Norwegian Coast Guard cutter Senja inspected the eruption area by helicopter and reported a 400-m-diameter crater. A 1-km-long lava flow moved NNE from the crater into the sea, which was "boiling" up to 150 m from the shore. The next day, the crater was again observed from a helicopter and located at 71.147°N, 7.998°W, about 10 km NE of the summit. The lava flow had almost stopped and "boiling" seawater was still present to 150 m from the shore. By 10 January the seismic activity had almost returned to normal levels. The preliminary location of most of the crater seismic activity was 71.13°N and 7.98°W, about 9 km NE of the summit, at depths of about 12 km.

Geological Summary. Remote Jan Mayen Island, located in the Norwegian Sea along the Jan Mayen Ridge about 650 km NE of Iceland, consists of two volcanic complexes separated by a narrow isthmus. The large Beerenberg basaltic stratovolcano (Nord-Jan) forms the NE end of the 40-km-long island, which is ringed by high cliffs. The glacier-covered Beerenberg has a 1-km-wide summit crater and numerous cinder cones that were erupted along flank fissures. It is composed primarily of basaltic lava flows with minor amounts of tephra. Reported eruptions from Beerenberg date back to the 18th century. The SW tip of Jan Mayen contains the Holocene Sor-Jan cinder cones, tephra rings, and trachytic lava domes were erupted from short fissures with a NE-SW trend.