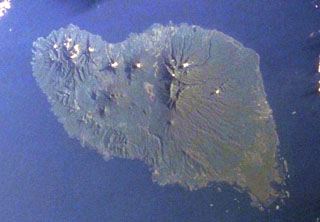 
"Following damaging earthquakes and changes at a thermal area on Umboi Island during August, local people were concerned about possible volcanic activity. A brief visit was made to Umboi by R. W. Johnson (Bureau of Mineral Resources, Canberra) on 5 September. He reported no signs of imminent volcanic threat but recommended that an officer from Rabaul Volcano Observatory (RVO) visit Umboi for further investigations.

"On 12 September, inspection of the thermal area on the W flank of Talo volcano (on the W side of Umboi Island) indicated that no increase in temperature had occurred. However, local subsidence had taken place. This was probably due to strong shaking of the ground during the strongest earthquake on 19 August.

"Nine local earthquakes were recorded 11-14 September, two reportedly felt. These earthquakes are probably local to Umboi Island, but it is uncertain whether they are directly related to the volcano. Seismic records indicate that earthquakes were continuing at a low level in mid-September."

Geological Summary. Umboi Island, 50 km in its longest dimension, is the largest of the volcanic islands off the N coast of New Guinea. Dominantly basaltic-andesitic, it is comprised of several coalescing stratovolcanoes cut by a 13 x 17 km caldera whose walls rise up to 1 km above its floor. The caldera is widely breached to the sea on the NE side and contains three youthful post-caldera cones with summit crater lakes, Talo, Soal, and Barik. Talo, displays several thermal areas and has satellitic cones on its flanks. No historical eruptions have been reported, but activity of the post-caldera cones is thought to have continued until the last few hundred years (Johnson et al., 1972).