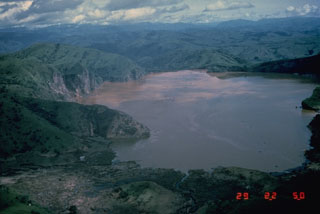 
A technical mission sent . . . by the Italian Ministry of Civil Protection arrived . . . seven days after the catastrophe. On 28 August at 1445, with the air temperature at 23°C, they measured a temperature of 30°C (with an Orion digital thermometer) and a pH of 6.75 in the uppermost 2 m of lake water from the NW shore. During their 29 August-4 September depth survey, the U.S. team measured a minimum surface water temperature of 22°C and bottom water was at 23°C; pH was 5.15. Measurements of lake temperatures and pH values appeared to be affected by the amount of sunshine and rainfall (in one instance, nearly [13 cm] of rain fell in 1 hour) in the area.

The Italian team reported that data (provided by the prefecture of Wum) on the distribution of victims, and their own field observations on the distribution of dead animals suggested that the gas cloud had lethal CO2 concentrations up to 50 m above the bottom of the valley that extends from the lake spillway to Nyos and Cha villages. However, the mild effects on vegetation (withering of palm and reed leaves) were only observed up to 4-6 m on the valley floor. The gas cloud dissipated rapidly in some areas; a motorcycle rider could safely reach . . . Cha ~2 hours after the event.

Dr. Chiara Monzali, medical expert of the Italian mission, concluded that the first-degree skin burns observed on some survivors were most likely produced by a hot humid cloud (at ~50-70°C) and not by acid gases. The very mild effects on the vegetation in the valleys affected by the gas cloud seemed, to the Italian team, to confirm the medical evaluation. . . . . Investigations of industrial CO2 accidents in the U.S. have shown that breathing high levels of the gas can cause some failure of the circulatory system near the skin. This can lead to sloughing of the skin, producing lesions similar to those seen on some of the survivors. As reported in 11:8, survivors in some areas remained unconscious for many hours. An anesthesiologist noted that they would remain unconscious as long as high levels of CO2 remained in the air.

Italian volcanologists suggested that the gas blast was produced by a sudden injection of hot fluids with a high CO2 content into the lake bottom. Chemical analyses of the lake water (down to 2 m depth) indicated high CO2 partial pressure (up to 100 times atmospheric equilibrium). The geologic setting . . . would allow the presence of hot geothermal fluids in the subsoil (recent volcanic activity and deeply fractured granitic basement allowing circulation of fluids to great depth with consequent heating). They noted that if CO2 release had occurred from deep gas-saturated lake water brought to the surface, it would have necessarily induced a marked reduction in the lake water volume. Unfortunately, few data are available on lake level changes. However, helicopter pilots who flew over the lake on 21 August reported that the lake level was ~1 m below the spillway, and that the outflow of the lake had stopped temporarily after the event.