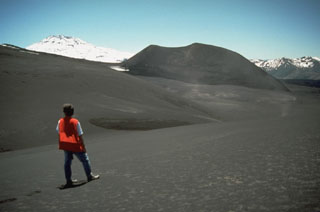 
An active solfataric field was detected in one of Tolguaca's NW craters (at 38.29°S, 71.67°W) during a March 1986-January 1987 geologic study. Several vents up to 2 m wide covered an area of ~200 m2. The vents emitted boiling water, high pressure steam, and H2S, with a jet-like noise. The entire area showed intense alteration and a small amount of sulfur deposition.

Geological Summary. Tolhuaca (or Tolguaca) is a late-Pleistocene to Holocene stratovolcano located immediately NW of Lonquimay volcano. A NW-SE zone of aligned summit craters is youngest to the NW. Another group of vents cutting the south and east flanks is oriented SW-NE, parallel to the zone of flank vents on Lonquimay, and is of post-glacial age (Moreno and Gardeweg 1989). Reports of eruptions in 1876 and on 7 January 1933 are not confirmed; the latter date probably refers to an eruption of Lonquimay or Llaima (Petit-Breuilh 1994, pers. comm.). Polanco et al. (2000) stated that explosive activity consisted of three VEI 3-4 eruptions between 8050 and 6590 BP. The Pemehue volcanic trend on the NW flank was noted by Naranjo (pers. comm. 2010) in Melosh et al. (2012) as having post-glacial lava flows dated at less than 6,000 years old. Only fumarolic activity has occurred from this basaltic-andesitic volcano during historical time. Fumaroles and hot springs are common across the NW flank where there is an active geothermal reservoir (Melosh et al., 2012).