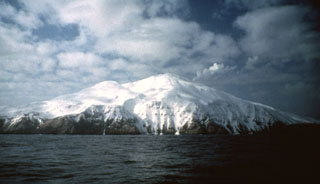 
From a 15 April NOAA 9 satellite image (at 1704), Steven Shivers (USGS) noted a narrow plume drifting ~60 km E from the volcano. No reports of an eruption have been received from airplane pilots or ground observers.

Geological Summary. Conical Kiska volcano is the westernmost historically active volcano of the 2500-km-long Aleutian arc. The volcano lies at the northern tip of the elongated Kiska Island, across a low isthmus containing East Kiska and West Kiska lakes. A 400-m-wide elliptical crater, breached to the north, caps the 1220-m-high stratovolcano. The volcano is surrounded on three sides by sea cliffs up to 450 m high and overlies an older volcanic center exposed to the south. A massive submarine debris-avalanche deposit extends 40 km to the NNW. The southern part of the NE-SW-trending island, the westernmost of the Rat Island group, has been glaciated, but all lava flows post-date the last major glaciation. Young, steep-sided blocky lava flows, primarily on the N and SW flanks, have originated from vents at locations ranging from the summit to near sea level. A flank cinder cone and associated lava flows were erupted in 1962 at Sirius Point on the northern coast. The island contains one of the best harbors in the Aleutian Islands, but is uninhabited.