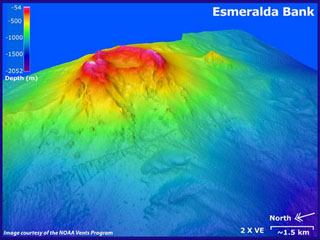 
On 26 May, the pilot of a charter aircraft observed a heavy "boil" on the ocean surface over Esmeralda, feeding an elongate zone of discolored water. The pilot reported that he had not seen activity at Esmeralda in many years. On 4 June, L.G. Eldredge and the same pilot flew over Esmeralda, but saw no water movement or discoloration.

Geological Summary. Esmeralda Bank is a massive submarine volcano with three summit cones oriented along a N-S line. Their summits are from 43 to 140 m beneath the sea surface. The highest, middle peak contains a 3-km-wide caldera open to the west and several parasitic cones. Frequent sulfur boils and water discoloration have been observed, which have variously been attributed to eruptive events or solfataric activity.