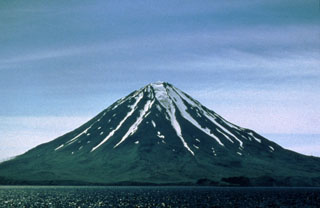 
At 1359 on 16 November, pilots Dave Holman and Jay Brown (U.S. Coast Guard) noted steam with some ash being emitted from the summit vent of a volcano that they believed to be Carlisle. The plume rose to 2,500 m altitude . . . and trailed 30 km ENE. Of the five islands in the immediate area, the pilots were able to see the three closest to the Bering Sea (Kagamil, Uliaga, and Carlisle), but could not see the islands closer to the Pacific Ocean (Herbert or Chuginadak). Although their report strongly suggested that Carlisle was the source of the activity, the possibility that it was from Mt. Cleveland (10 km SE on Chuginadak Island), site of recent ash emission (SEAN 12:6-8), could not be eliminated. Steam (but no ash) was emerging from Carlisle's summit when it was observed on 28 August.

Geological Summary. Carlisle Island is a steep-sided, conical stratovolcano across the Carlisle Pass strait from Mount Cleveland. Radar images suggest that this uninhabited, 7-km-wide island may contain two closely spaced volcanic cones (Myers, in Wood and Kienle 1990). Like nearby Herbert volcano, no geologic studies have been conducted on the volcano. Eruptions have been reported since the 18th century, but are very poorly documented. A variety of names was attached to Carlisle on early hydrographic maps, and Miller et al. (1998) noted that some 18th and 19th century eruptions reported at the closely spaced volcanoes of the "Islands of the Four Mountains" area could refer to Carlisle as well as Cleveland, Uliaga, or Kagamil volcanoes.