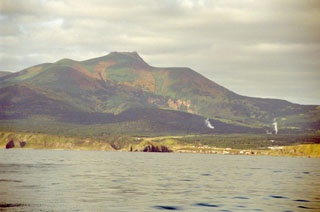 
A summit earthquake swarm with focal depths of <10 km was recorded 4-5 May 1987 (table 9-1). Epicenters were <15 km from Yuzhno-Kurilsk seismic station (12 km from the volcano). Repeated measurements 25-28 September in a borehole 10 km from the summit registered temperatures 4°C higher than in 1986 at a depth of 74 m. Temperatures increased 4-5°C in some hot springs on the E and S flanks. Fumaroles in the same area showed essentially no variation from 1986; vapor emitted under pressure had temperatures of 97-107°C. . . . the earthquakes seemed to be caused by exploitation of geothermal wells, used for heat production.

Geological Summary. Raususan, also known as Mendeleev, is a low compound stratovolcano located in the southern part of Kunashir Island. The dominantly andesitic-dacitic volcano is cut by two nested calderas, the larger 6-7 km in diameter and the smaller 3-3.5 km. A central cone that formed inside the younger caldera was breached to the west by a large debris avalanche about 4200 years ago. A lava dome that grew inside the avalanche scarp forms the 888 m high point of the volcano. Additional lava domes in the northern part of the older caldera are considered to represent flank activity of the younger caldera. The only unambiguous historical eruption was a small phreatic explosion in 1880. Four solfatara fields lie at the eastern and northern flanks of the central cone, and a geothermal field is located outside the caldera along the eastern coast.