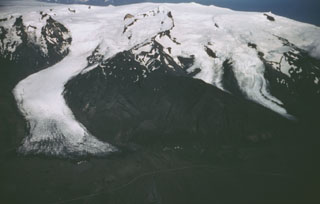 
On 22 December IMO reported that activity at Öræfajökull had been fairly stable during the previous weeks, though still above background levels; the Aviation Color Code remained at Yellow. In December the largest earthquake detected was a M2.5, but most events were smaller than M1. Earthquakes were located close to the caldera at depths between 2 and 10 km.

Geological Summary. Öræfajökull, Iceland's highest peak, is a broad glacier-clad central volcano at the SE end of the Vatnajökull icecap. A 4 x 5 km subglacial caldera truncates the summit of the dominantly basaltic and rhyolitic volcano. The extensive summit icecap is drained through deep glacial valleys dissecting the SW-to-SE flanks. It is the largest-volume volcano in Iceland, and was mostly constructed during Pleistocene glacial and interglacial periods. Holocene activity has been dominated by explosive summit eruptions, although flank lava effusions have also occurred. A major silicic eruption in 1362 CE was Iceland's largest historical explosive eruption. It and another eruption during 1727-28 were accompanied by major jökulhlaups (glacier outburst floods) that caused property damage and fatalities.