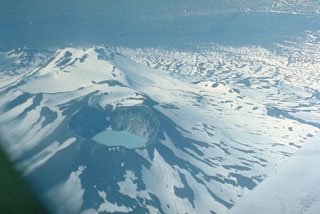 
KVERT reported that activity at Maly Semyachik increased during the second half of March; the ice covering the crater lake melted within a 5-6-day period, and a weak thermal anomaly was visible in satellite images. The Aviation Color Code was raised to Yellow (the second lowest level on a four-color scale) on 22 March. A weak thermal anomaly continued to be detected through 20 April, though no further activity prompted KVERT to lower the Aviation Color Code to Green.

Geological Summary. Maly Semyachik is a compound stratovolcano located in a 10-km-wide caldera within the 15 x 20 km mid-Pleistocene Stena-Soboliny caldera. Following construction during the late Pleistocene of the Paleo-Semiachik volcano beginning about 20,000 years before present (BP), activity migrated to the SW, forming Meso-Semiachik (about 11,000-9,000 BP) and Ceno-Semiachik (about 8,000 BP to the present). An initial stage lasting about 3,500 years was dominantly explosive, constructing the present cone. A second stage beginning about 4,400 years ago was marked by alternating constructive and destructive processes. A crater lake fills the historically active Troitsky Crater, which formed during a large explosive eruption about 400 years ago.