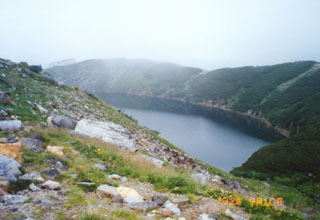 
JMA raised the Alert Level for Midagahara to 1 (the lowest level on a 5-level scale) on 30 May due to an undescribed potential for increased activity at the crater.

Geological Summary. Midagahara volcano is a dissected andesitic-to-dacitic stratovolcano on a plateau surrounded by high peaks of the North Japan Alps. The granite-and-gneiss peak of Tateyama lies immediately to the east. Formation of a 4-km-wide erosional caldera was followed by repeated eruptions of lava and pyroclastics forming the Midagahara plateau that was later dissected by the Yukawa river. Holocene eruptions have been restricted to small phreatic explosions that formed craters. A minor historical eruption occurred in the 19th century. An earthquake swarm took place in 1990. Hot springs occur in seven locations on the floor of the poorly defined erosional caldera.