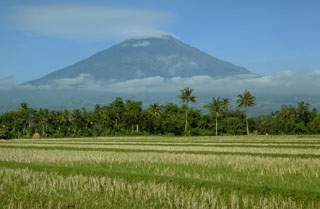 
Based on pilot observations, the Darwin VAAC reported that an eruption plume from Sumbing rose to an altitude of 4.9 km (16,000 ft) a.s.l. and drifted W. Ash was not identified on satellite imagery. [Correction: CVGHM later confirmed that Sumbing did not erupt on 1 August and attributed the plume origin to either a different volcano or a bushfire that was reported in the area.]

Geological Summary. Gunung Sumbing is a stratovolcano that is the SE-most edifice of a chain of volcanoes in central Java that includes Sundoro and the Dieng Complex. Prominent cones are located on the N and SE flanks. An 800-m-wide summit crater is breached to the NE, but is partially filled by a lava dome that fed a flow down to 2,400 m elevation. Emplacement of the dome followed the eruption of extensive pyroclastic flows down the NE flank. Activity reported in about 1730 CE may have produced the small phreatic craters found at the summit.