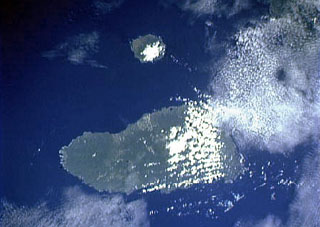 
Based on analyses of satellite imagery, the Darwin VAAC reported that on 18 September a possible diffuse ash plume from Sakar rose to an altitude of 1.8 km (6,000 ft) a.s.l. and drifted 165 km NW. Four hours later images showed that the volcano was clear; the plume may have been smoke from a fire or steam. RVO was unable to confirm that an eruption had or had not occurred. [Note: The Darwin VAAC later confirmed that an eruption did not occur.]

Geological Summary. Sakar is an incised stratovolcano with a summit crater lake. Deep valleys cut the flanks of the volcano, which is partially surrounded by coral reefs. An older volcano that forms much of the island consists mainly of porphyritic basaltic rocks. A younger andesitic cone with a 1.5-km-wide crater has been constructed within the older volcano's larger crater, whose rim is exposed on the northern and eastern sides. No historical eruptions are known from Sakar, but warm springs are found along the SW coast, and a pyroclastic cone on the southern flank of the 8 x 10 km wide island may be of Holocene age (Johnson 1990, pers. comm.). A large submarine debris-avalanche deposit lies north of Sakar.