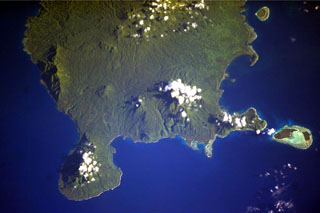 
On 27 May the Vanuatu Geohazards Observatory stated that the Alert Level for Suretamatai was increased to 1 (on a scale of 0-4) because of a change in activity. VGO reminded residents and tourists that areas around the volcano and along the Sulfur River (E flank) were high-risk zones due to potential impacts from volcanic gas emissions.

Geological Summary. Suretamatai volcano (also known as Soritimeat) forms much of Vanua Lava Island, one of the largest of Vanuatu's Banks Islands. The younger lavas overlie a number of small older stratovolcanoes that form the island. In contrast to other large volcanoes of Vanuatu, the dominantly basaltic-to-andesitic Suretamatai does not contain a youthful summit caldera. A chain of small stratovolcanoes oriented along a NNE-SSW line gives the low-angle volcano an irregular profile. The youngest cone, near the northern end of the chain, is the largest and contains a lake of variable depth within its 900-m-wide, 100-m-deep summit crater. Activity reported during the 19th century consisted of moderate explosive eruptions.