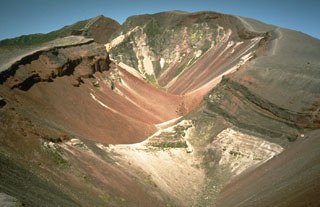 
GeoNet reported that the Mud Rift feature at Okataina's Waimangu Geothermal area erupted during 17-20 May, the first time since 1989. The Mud Rift geothermal vent formed in 1906 in the Raupo Pond Crater (one of multiple craters which formed in June 1886) and is 36 m long, 5-6 m wide, and 15 m deep. The steam-driven events mostly ejected fine sand and mud, and there was abundant evidence of fluids flooding into the rift, especially at the W end. Nearby vegetation was brown, and there was some evidence of collapse around the edges of the vents.