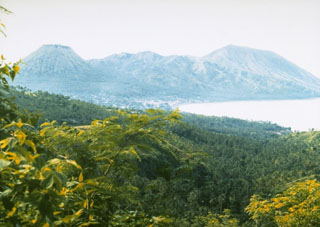 
PVMBG reported that during 1 July-29 September variable-density white plumes rose as high as 150 m above Iya. During most of that period seismicity was at normal levels characterized by deep and shallow volcanic earthquakes each detected at a rate of less than 10 events per day. Between 1550 and 1800 on 29 September, however, the seismic network detected 17 volcanic earthquakes. Since the number of volcanic earthquakes was significant and above normal levels, the Alert Level was raised to 2 (on a scale of 1-4), and the public was warned not to approach the crater within a 2-km radius.