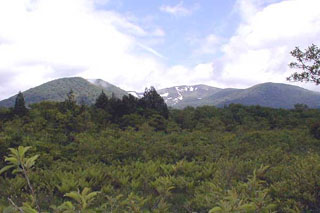 
JMA raised the Alert Level for Kurikomayama to 1 (the lowest level on a 5-level scale) on 30 May due to an undescribed potential for increased activity at the crater.

Geological Summary. The summit of Kurikomayama volcano is cut by a 4-km-wide caldera breached to the north that is partially filled by the Tsurugi-dake central cone, once mined for sulfur. The complex andesitic-to-dacitic stratovolcano was constructed over a relatively high basement of welded and unwelded Tertiary dacitic tuffs and sedimentary rocks and thus has a smaller volume than its height suggests. Early stage eruptions beginning about 500,000 years ago produced lava flows to the north and south, followed by growth of the Higashi-Kurikoma (East Kurikoma) stratovolcano. Magusadake volcano on the western side of the complex was active until about 100,000 years ago. Construction of the main cone concluded with lava flows to the E, SE, and W. Daichigamori lava dome and Aguroshi-yama pyroclastic cone are located on the southern flank. Minor phreatic eruptions have occurred in historical time from the central cone.