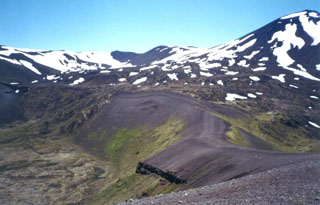 
On 11 March SERNAGEOMIN raised the Alert Level for the Antillanca Volcanic Complex to Yellow because of increased seismicity near Casablanca stratovolcano. Volcano-tectonic (VT) earthquakes began to be recorded in August 2019 and were located about 6.3 km NE of the stratovolcano. During 31 January-1 February a total of 131 VT events were located to the W and NW; the two largest events were M 3.1 and 3.2. A swarm of 73 VT events were detected on 9 March with epicenters located 2.4 km NNW and a maximum local magnitude of 1.8.

Geological Summary. The Antillanca Volcanic Complex is a cluster of late-Pleistocene to Holocene basaltic-to-andesitic scoria cones, maars, and small stratovolcanoes covering an area of 380 km2 SE of Lago Puyehue and NE of Lago Rupanco. The most prominent edifice is the Holocene Casablanca stratovolcano, which has a truncated conical profile and produced major explosive eruptions about 2,910 and 2,260 radiocarbon years ago. Older late-Pleistocene stratovolcanoes, such as Sarnoso to the SW and Fiuchá to the NW, are extensively dissected by glaciers. Fissures oriented in four major directions influence the orientation of the cones. Thermal areas are found in scattered locations on the NW side of the complex.