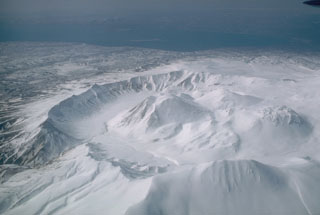 
AVO reported a loss of operation and communication with seismic stations that monitor Ugashik-Peulik, likely caused by snow cover. Both the Aviation Color Code and the Volcano Alert Level were changed to Unassigned on 19 April, reflecting the inability to locate earthquakes to detect unrest. Monitoring will continue with the remaining seismic stations, regional infrasound networks, lightning detection, and satellite images.

Geological Summary. The Ugashik-Peulik volcanic complex lies south of Becharof Lake and east of Upper Ugashik Lake. Late-Pleistocene caldera formation was followed by the emplacement of at least five Holocene lava domes within the 4.5-km-wide caldera. Most of the caldera walls consist of basement sandstones of Jurassic age. Following caldera formation the small, 3 km3 Peulik stratovolcano grew 2.5 km to the N. Lava flows from Peulik cover the caldera rim to the south and extend to Becharof Lake, 6 km N. A small lava dome on the E flank of Peulik was the source of a small block-and-ash flow. The summit of Peulik contains a 1.5-km-wide crater breached to the west that is partially filled by a lava dome. Debris-avalanche deposits cover a 75 km2 area to the NW. A single documented historical eruption took place from Peulik in 1814.