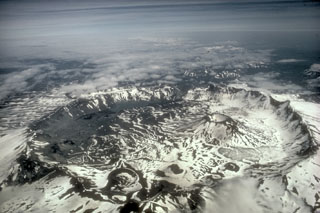 
AVO reported that strong winds in a region NW of Aniakchak and E of Port Heiden resuspended ash and blew it NW on 30 June. A dense cloud of possible resuspended ash near ground levels was identified in Port Heiden webcam views. The altitude of the cloud was unknown, though the report noted that resuspended ash clouds typically do not rise above 5 km (16,400 ft) a.s.l. The cloud was not a result of volcanic activity; the Aviation Color Code and the Volcano Alert Level remained at Green and Normal, respectively.

Geological Summary. One of the most dramatic calderas of the Aleutian arc, the 10-km-wide Aniakchak caldera formed around 3,400 years ago during a voluminous eruption in which pyroclastic flows traveled more than 50 km N to the Bering Sea and also reached the Pacific Ocean to the south. At least 40 explosive eruptions have been documented during the past 10,000 years, making it the most active volcano of the eastern Aleutian arc. A dominantly andesitic pre-caldera volcano was constructed above basement Mesozoic and Tertiary sedimentary rocks that are exposed in the caldera walls to elevations of about 610 m. The ice-free caldera floor contains many pyroclastic cones, tuff cones, maars, and lava domes. Surprise Lake on the NE side drains through The Gates, a steep-walled breach on the east side of the 1-km-high caldera rim that was the site of catastrophic draining of a once larger lake about 1850 years BP. Vent Mountain and Half Cone are two long-lived vents on the south-central and NW caldera floor, respectively. The first and only confirmed historical eruption took place in 1931 from vents on the west and SW caldera floor.