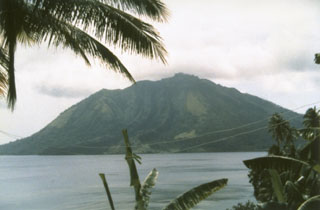 
PVMBG reported that emissions from Ruang were unobserved during periods of clear weather from 1 January through 12 March. Seismicity increased starting on 6 March prompting PVMBG to raise the Alert Level to 2 (on a scale of 1-4) on 12 March. Residents and tourists were warned not to approach the craters within a 1.5-km radius.