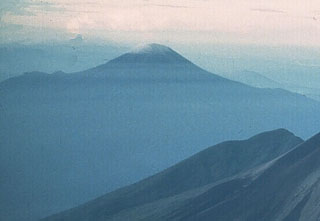 
"Seismic activity . . . decreased markedly in April. Following a period of intense activity in early March, the frequency of occurrence and magnitude of earthquakes decreased gradually, with only 27 events of ML >=3 recorded in April (from a total of 200 events picked up by the Ulawun station, 25 km away). Event frequency ranged between 2 and 7/day. Two isolated earthquakes of ML 5.6 and 4.2 occurred on the 26th."