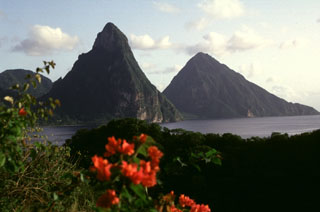 Bulletin of the Global Volcanism Network, vol. 15, no. 5 (May 1990)
Managing Editor: Lindsay McClelland.


"Since 17 May 1990, seismic stations in St. Lucia have been registering local earthquakes that appear to be of volcanic origin (both A- and B-type events were observed). About 172 events were detected by seismic station SLB (figure 1) from 17 May to 10 June, with peak activity occurring on 19 and 20 May (figure 2).

"Hypocentral parameters calculated for 34 well-recorded earthquakes show that events were predominantly clustered ~6 km ESE of Qualibou caldera, near Mt. Victorin (altitude 265 m). Focal depths were in the 10-20 km range and magnitudes were generally <mb 2.5. The largest event, of mb 4.6, occurred on 19 May at 1344 and was widely felt throughout St. Lucia. Two other events had magnitudes between 3.0 and 4.0 and were also felt.

"This is the first significant earthquake series that has occurred in St. Lucia since the establishment of a seismic station on the island in 1953, and does not appear to be a foreshock-mainshock- aftershock sequence. The cause of the seismicity is still uncertain but may be due to the intrusion of a small magma body. Temperatures of hot springs in Qualibou caldera did not exhibit any significant variation during the main period of the activity and no episodes of harmonic tremor were recorded."

Geological Summary. The Qualibou caldera on the SW side of St. Lucia provides the setting for the Pitons, two steep-sided pre-caldera lava domes that form one of the scenic highlights of the West Indies. The 3.5 x 5 km caldera formed about 32-39,000 years ago in conjunction with the eruption of the Choiseul Tuff. A larger depression has been interpreted to have formed by edifice collapse, and bathymetry has identified large submarine debris-avalanche deposits off the west coast of the island. This depression and associated volcanic vents and geothermal areas is also known as the Soufrière volcanic centre. Numerous resurgent post-caldera lava domes fill the caldera floor. The latest dated magmatic eruptions took place about 20,000 years ago, but younger undated lava domes and explosion craters are present. The only known Holocene eruptive activity was a minor phreatic eruption in the Sulfur Springs geothermal area in 1766 CE that ejected a thin ash layer over a wide area. A volcanic earthquake swarm centered 6 km ESE of the caldera occurred in 1990.