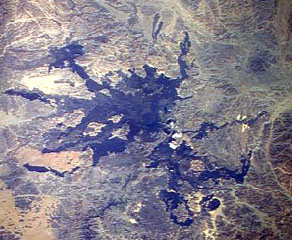 
An intense seismic swarm coupled with surface deformation spurred the evacuation of over 30,000 residents, led to an 8 km long surface rupture, and was consistent with the injection of a shallow dike that never reached the surface. Between April and June 2009 more than 30,000 earthquakes occurred beneath one of the lava fields of Saudi Arabia adjacent the N-central portion of the Red Sea and centered inland ~50 km ENE from the port city of Umm Lajj (figure 1). The field is known as Harrat Lunayyir (the words harrat and haarrat indicate a volcanic field, named and unnamed, respectively). Ultimately a narrow, 8 km long surface rupture developed and the seismicity declined. The event was interpreted as due to a shallow intrusion that did not reach the surface. Table 1 at the end of this report gives an overview of the crisis, which included evacuations.

This report is based on Pallister and others (2010) as well as a report from scientists from the USGS-USAID Volcano Disaster Assistance Program (VDAP) and the Saudi Geological Survey (SGS). The government of Saudi Arabia evacuated more than 30,000 people from the town of Al Ays on the SE margin of the volcanic field, due to fears that further larger earthquakes could occur or that there could be a volcanic eruption (figures 2 and 3). In response to this situation, SGS increased their presence in the region and installed a permanent telemetered seismic network of seven broadband seismometers in the area to better monitor the seismicity.

A punctuated earthquake swarm began at Harrat Lunayyir in April 2009, with a peak on 19 May when 19 earthquakes of M 4 or greater occurred. The largest of those earthquakes was variably assessed as M 5.4 (SGS) and M 5.7 (USGS National Earthquake Information Center). It struck at 1735 UTC (2035 local time). The earthquake caused minor damage to structures in the town of Al Ays (40 km SE of the epicenter).

Surface rupture. In the northern central part of the lava field the initial surface rupture extended 3 km, trended NW, and appeared during the week preceding 19 May (when maximum earthquake magnitudes exceeded M 4). Associated with the M 5.4 earthquake on 19 May, the rupture lengthened to 8 km. The rupture had local vertical offsets of more than 1 meter and was several meters deep (figures 4 and 5). Event rates decreased dramatically on 20 May and maintained a relatively constant level, except for a few increases in event rate lasting 24 hours.

Combining seismic with InSAR and modeling. Results from InSAR data and geodetic modeling were consistent with the timing of the seismic swarm. InSAR data showed that 75% of the deformation occurred during 8-27 May 2009, and 20% occurred during 27 May to 17 June (figure 6). Interferograms from May and June showed a broad area of deformation of about 2,000 km2, which is indicative of dyke intrusion. Envisat interferograms showed about 40 cm of uplift and over 1 m of E-W extension.

Earthquakes suggestive of volcanism. Initially, scientists were unsure if the earthquakes were tectonic or volcanic in origin. On 12 June two members of a VDAP team deployed to Saudia Arabia at the request of the SGS to provide technical assistance. The VDAP and SGS teams determined that the earthquake pattern was that of a volcanic earthquake swarm. It was characterized by several ten's of thousands of small (under M 3) earthquakes during 24 April-31 July 2009, in a pattern of seismicity that waxed and waned. Earthquakes occurred of both varying magnitude and lacking tectonic mainshock-aftershock sequences. RSAM (real-time seismic-amplitude measurement) data showed that energy increased dramatically on 29 April, peaking on 19 May with the previously mentioned largest (M 5.4) event.

Other common volcanic-swarm characteristics included a high rate of occurrence of small compared to large events, and shallow event locations clustered beneath the lava field at around 5-10 km in depth. The event types included those of high-frequency (13-28 Hz), very low-frequency (less than 1 Hz), and high-frequency tremor. The latter contained embedded spasmodic bursts of high-frequency earthquakes (13-28 Hz).

An unusual aspect of the swarm was that both low- and very low-frequency earthquakes occurred, events that are usually associated with movements of fluids (magma, water or gas) and Strombolian explosions, but in this case both gas emissions and explosions were absent.

The VDAP and SGS teams concluded that there were three key lines of evidence that the earthquakes were volcanic. First, the earthquakes were occurring in a volcanically active area. Second, deformation was measured and interpreted to indicate a shallow dyke intrusion. Third, the types of earthquakes that occurred were characteristic of volcano-related seismicity.

The volcanic risk was relatively low due to the small population living near Harrat Lunayyir. On 19 June the team made a forecast that there was a moderate probability of a basaltic eruption and a low probability of additional large earthquakes of M 5 or greater occurring within the following 2 months. The forecast was based on the maximum magnitudes of earthquakes that typically accompany eruptions at other volcanoes, on the proportion of eruptions following multiple intrusions at dozens of volcanoes studied by VDAP, and on initial models of the InSAR anomaly. The team determined that the seismic swarm had ended by August 2009 when there was a decline in seismic activity and InSAR-detected deformation. After the forecast and after the buildings in Al Ays had been assessed for damage, evacuees were permitted to return to their homes.

Geological Summary. Harrat Lunayyir is a basaltic volcanic field in NW Saudi Arabia, east of the Red Sea port of Umm Lajj. It contains about 50 volcanic cones that were constructed over Precambrian crystalline rocks along a N-S axis. Harrat Lunayyir is one of the smallest of the Holocene lava fields of Saudi Arabia, but individual flow lobes radiate long distances from the center of the Harrat, and flows reached the Red Sea in two places. Lava flows are basaltic to basanitic in composition, and the Holocene flows are alkali olivine basalts. One of the cones may have erupted around the 10th century CE or earlier. A seismic swarm in May 2009 was interpreted to be consistent with intrusion of an 8-km-long dike to shallow crustal levels.