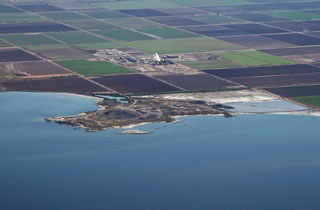 
A recent partial survey conducted by David K. Lynch and Paul M. Adams of Red Island, previously known as Red Hill, in Southern California, USA, has resulted in the discovery of five steaming hot vents on the SW flank of the northern Salton Buttes volcanic field. Lynch and Adams sent us a report, which follows. We also include some remarks from related literature and note geothermal power plants in the region.

Background. Red Island is part of the Salton Buttes, a collection of five late Quaternary rhyolitic volcanic necks in the Salton Sea Geothermal Field (SSGF) (figure 1). The SSGF rests within a topographic low, and has a geothermal gradient that averages ~0.3°C/m, reaching a maximum of 4.3°C/m (Lynch and others, 2013). This high geothermal gradient results from the shallow magma body of the spreading center between the San Andreas and Imperial faults. As shown in figure 2, the SSGF lies at the head of the Gulf of California, on the boundary of the Pacific and North American plates (Elders and Sass, 1988). Consequently, the SSGF's unique geology creates the perfect setting for hot geothermal fluids to seep to the surface, and has been slated as a site for geothermal electricity-generating plants. There are no previous Bulletin reports on the Salton Buttes.

The Salton Buttes reside near the SE end of the Salton Sea. The Sea resides on the floor of the Salton Trough, chiefly in Imperial County, California. This briny water body is about 56 x 10 km. The Buttes lie along a NNE trending line spanning a distance of 7 km. The Salton Trough was filled, in part, by sediments carried by the Colorado River, which eventually built up and blocked the river's flow. The river was diverted away from the Salton Trough, yet, in 1905, heavy rainfall caused nearby levees to collapse, creating the Salton Sea (Morris, 2008).

Until recent work by Lynch and others (2011) and Schmidt and others (2013), the Salton Buttes were thought to have been formed by extruded magma during the late Pleistocene, ~16,000 BP. Age dates for some lavas are now dated to closer to 2,000 BP, much younger than originally understood, bringing closer scrutiny of the Buttes by the U.S. Geological Survey (USGS) California Volcano Observatory and other agencies concerned with geological threats in California (Lynch and Adams, unpublished draft).

Red Island consists of two conjoined volcanoes of related, yet distinctly different, geology. They are 2.5 km SSW of the Mullet Island fumaroles, an area discussed further by Lynch and others (2013).

Mullet Island fumaroles: As the briny water level of the Salton Sea began dropping in 1983, a number of fumarole fields were exposed subaerially for the first time since 1945. The Salton Sea overlaps the SSGF and, as a result, an interaction of rising gas and hot water with sediments has produced a number of hot, fumarolic gryphons (mud volcanoes) and salses (bubbling water in calderas of gryphons) (Lynch and others, 2013). Over-pressured subsurface gas cause the upward migration of fluidized sediment, creating these gryphons, as seen in figure 3.

The NW trending alingment of these geothermal features is suggestive of a fault, most likely the Calipatria fault. Other fumarole fields are still below water level or are being exposed as the lake recedes.

Red Island vents. Before the work on Mullet Island fumaroles was published, Michael McKibben, while on a 2008 Desert Symposium field trip (Reynolds and others, 2008), mentioned a 'volcanic hotspot' on the SW flank of the N volcano at Red Island in a private communication to Lynch and Adams. However, a swift search of the area during the field trip did not reveal its location. As a result of this observation, Lynch and Adams performed a partial survey of the SW flank of the N volcano on 6, 7, and 29 November 2013, which resulted in the discovery of the five hot steaming vents on the summit of the south-facing slope. Lynch and Adams found that the vents were distributed along an ~80 m long line trending N65E, which they recognized as a possible fault.

All attempts at identifying vents were made before sunrise, when the air temperature was at its lowest diurnal value (~8°C). This provided a recognizable thermal contrast between cold and hot rocks. Lynch and Adams noted that it was unlikely that warm air coming from the vents could have been felt on a hot or windy day, as the vents appeared unremarkable from a relatively close distance (a few meters), "among the uneven field of loose, jutting volcanic rocks." To locate the vents, Lynch and Adams employed the following three tactics:

1. An Agena ThermoVision 470 infrared camera was used to look for areas that were warmer than the background (e.g., figure 4, lower). Absolute temperatures from the camera may have been off by 3-4°C due to systematic errors, but the image records relative temperatures between different parts of scene. were preserved. The vent seen in figure 4 may have been deliberately covered with a pile of rocks.

2. They reached into holes and crevasses to check for heat.

3. They measured rock temperatures using a Martin P. Jones & Associates, Inc., Model 9910 TE Infrared Thermometer. Because it was small enough to be placed deeper in the vents, the temperatures from this thermometer were higher than the IR camera temperatures.

Lynch and Adams found one vent "by feeling hot air coming from it," one "by noticing wet rock," one "by seeing its steam cloud," and two by locating them with the IR camera. Once located, all vents were found to be steaming (figure 5) and surrounded by rocks wet from condensation.

No surface deposits (e.g., sulfur) were seen, aside from water and greenish algae. The temperatures 1-2 m within the vents were 35-38°C. According to Lynch and Adams, these hotspots may "represent heat from original volcanism, or recent magma intrusions that have not reached the surface." The distribution of these vents, distinguished as H1, H2, H3, H4, H5, is shown in figure 6.

The team was relatively confident that no additional vents were located within the area extending 225 m to the S and W, although a more complete survey must be undertaken to investigate seismicity and movement/deformation of the area from GPS networks. However, other "warm spots" not associated with venting or outgassing were found on the SW flank of the N volcano. They were ~5-10°C warmer than ambient temperatures and may represent weak signals from the warm interior of the volcano. More likely, however, the warmer temperatures are due to emissivity variations in rock layers, or normal temperature distributions that occur in crevasses where rocks are not able to radiate heat into the cold night sky.

Geothermal electricity-generating plants. According to the Geothermal Energy Association, currently there are three major geothermal production sites in the Imperial Valley, totaling in 16 plants. Figure 7 shows one of these sites, which hosts seven geothermal plants with running capacities ranging from 5-45 MW (Geothermal Energy Association). Despite the fact that this site alone has contributed enough electricity to power ~100,000 homes, geothermal energy only accounts for 4.4% of all system power in California (Matek and Gawell, 2014). The SSGF is considered the best opportunity for increasing the production of geothermal energy in California. The unique geology of the Salton Sea area allows geothermal fluids to seep to the surface, allowing a range of capacity from 1,700 to 2,900 MW.

Geological Summary. The Salton Buttes consist of five small rhyolitic lava domes extruded onto Quaternary sediments of the Colorado River delta at the SE margin of the Salton Sea. The age of the Salton Buttes has variously been considered to be late Pleistocene or early Holocene based on different dating techniques. Recent paleomagnetic dating calibrated by radiocarbon ages suggests that the Salton Buttes domes were erupted during an interval of about 500 years between about 2300 and 1800 years ago, with the possible exception of Mullet Island at the northern end of the field, which could be as much as 5000 years older. The present-day saline Salton Sea was formed in the early 20th century by unintended flooding into the basin formerly occupied by Pleistocene Lake Cahuilla Lake during diversion of the Colorado River for irrigation purposes. The Salton Sea geothermal field produces saline brines.