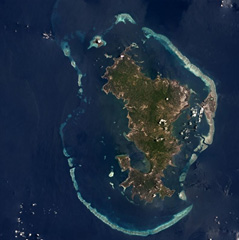 
Mayotte is a volcanic island in the Comoros archipelago between the eastern coast of Africa and the northern tip of Madagascar. A chain of basaltic volcanism began 10-20 million years ago and migrating W, making up four principal volcanic islands, according to the Institut de Physique du Globe de Paris (IPGP) and Cesca et al. (2020). Before May 2010, only two seismic events had been felt by the nearby community within recent decades. New activity since May 2018 consists of dominantly seismic events and lava effusion. The primary source of information for this report through February 2020 comes from semi-monthly reports from the Réseau de Surveillance Volcanologique et Sismologique de Mayotte (REVOSIMA), a cooperative program between the Institut de Physique du Globe de Paris (IPGP), the Bureau de Recherches Géologiques et Minières (BRGM), and the Observatoire Volcanologique du Piton de la Fournaise (OVPF-IPGP); Lemoine et al. (2019), the Centre National de la Recherche Scientifique (CNRS), and the Institut Français de Recherche pour l'Exploitation de la Mer (IFREMER).

Seismicity was the dominant type of activity recorded in association with a new submarine eruption. On 10 May 2018, the first seismic event occurred at 0814, detected by the YTMZ accelerometer from the French RAP Network, according to BRGM and Lemoine et al. (2019). Seismicity continued to increase during 13-15 May 2018, with the strongest recorded event for the Comoros area occurring on 15 May at 1848 and two more events on 20-21 May (figure 1). At the time, no surface effusion were directly observed; however, Global Navigation Satellite System (GNSS) instruments were deployed to monitor any ground motion (Lemoine et al. 2019).

Between 2 and 18 May 2019, an oceanographic campaign (MAYOBS 1) discovered a new submarine eruption site 50 km E from the island of Mayotte (figure 2). The director of IPGP, Marc Chaussidon, stated in an interview with Science Magazine that multibeam sonar waves were used to determine the elevation (800 m) and diameter (5 km) of the new submarine cone (figure 3). In addition, this multibeam sonar image showed fluid plumes within the water column rising from the center and flanks of the structure. According to REVOSIMA, these plumes rose to 1 km above the summit of the cone but did not breach the ocean surface. The seafloor image (figure 3) also indicated that as much as 5 km3 of magma erupted onto the seafloor from this new edifice during May 2019, according to Science Magazine.

During the MAYOBS 4 campaign in late July 2019, scientists dredged the NE flank of the cone for samples and took photographs of the newly erupted lava (figure 5). Two dives found the presence of pillow lavas. When samples were brought up to the surface, they exploded due to the large amount of gas and rapid decompression.

During April-May 2019 the rate of ground deformation slowed. Deflation was also observed up to 90 km E of Mayotte in late October 2019 and consistently between August 2019 and February 2020. Seismicity continued intermittently through February 2020 offshore E of Mayotte Island, though the number of detected events started to decrease in July 2018 (see figure 1). Though seismicity and deformation continued, the most recent observation of new lava flows occurred during the MAYOBS 4 and SHOM campaigns on 20 August 2019, as reported in REVOSIMA bulletins.