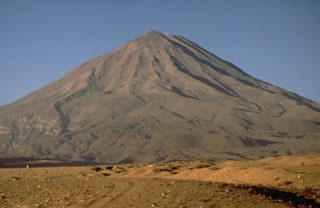 
"An increase in the normal emission of vapor from the volcano has been noted since the beginning of April. At times the column rose to about 1 km above the crater and was ejected from the dome (150 m in diameter) that is about 250 m below the outer rim of the crater. A temperature of 125°C has been registered for some years in the dome's fumarolic fissures. [At the dome, blocks of andesite are covered with sulfur, gypsum, anhydrite, and ralstonite.]

"It is possible that this increase in vapor (no such increase had been noted since April 1971) is caused by the evaporation of water from the rains which have been intense this year and abundant for 3 months, January-March. As the rains ended and the clouds disappeared, the impressive and sometimes intermittent vapor column from the volcano was visible from Arequipa (1,000,000 inhabitants including the suburbs). It cannot be excluded that a notable increase in natural degassing has also been occurring, in combination with the evaporation of atmospheric water.

"Persons who intended to go to the bottom of the crater 29 April to collect samples were prevented from doing so because gases irritated noses, throats, and eyes. They said that they also observed flaring, perhaps caused by the combustion of hydrogen or other gases.

"The Observatorio de Chacarato of the Instituto Geofísico, Universidad Nacional de San Agustín de Arequipa (10 km from the city and about 20 km from the volcano's crater) equipped with seismographs and magnetometers, had not registered any changes as of 8 May that could be attributed to perturbations of volcanic origin." . . .

Geological Summary. El Misti is a symmetrical andesitic stratovolcano with nested summit craters that towers above the city of Arequipa, Peru. The modern symmetrical cone, constructed within a small 1.5 x 2 km wide summit caldera that formed between about 13,700 and 11,300 years ago, caps older Pleistocene volcanoes that underwent caldera collapse about 50,000 years ago. A large scoria cone has grown with the 830-m-wide outer summit crater. At least 20 tephra-fall deposits and numerous pyroclastic-flow deposits have been documented during the past 50,000 years, including a pyroclastic flow that traveled 12 km to the south about 2000 years ago. The most recent activity has been dominantly pyroclastic, and strong winds have formed a parabolic dune field of volcanic ash extending up to 20 km downwind. An eruption in the 15th century affected nearby Inca inhabitants. Some reports of historical eruptions may represent increased fumarolic activity.