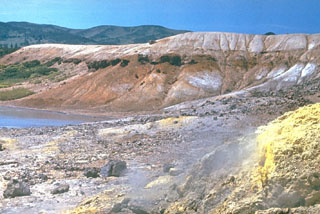 
During a 6 November aerial survey, moderate fumarolic and solfataric activity was noted at the N foot of the E and W domes and along Goryachee Lake's S shore.

Geological Summary. Tomariyama, also known as Golovnin, forms the southern end of Kunashir Island, across the Nemuro Strait from Hokkaido. Explosive activity has dominated in the formation of this andesitic-dacitic volcano; no lava flows are exposed. The gently sloping stratovolcano, is truncated by a 4-5 km wide caldera that formed during a series of late-Pleistocene eruptions beginning about 43,00 years ago. Several lava domes were subsequently emplaced on the caldera floor. Topographic highs outside the caldera rim define a series of lava domes extruded along a ring structure or an outer caldera. A 1 x 2.5 km caldera lake on the northern side of the inner caldera drains through a narrow breach in the western caldera wall. Solfataric activity occurs at the northern lake shore and at explosion craters (one of which contains a hot crater lake with reported temperatures from 36-100 degrees C) that cut the caldera-floor lava domes. The only known historical eruption was a minor explosion in 1848.