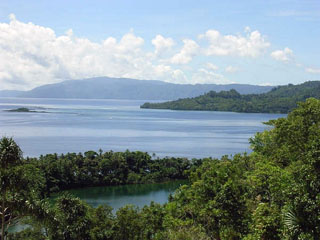 
Residents on Simbo Island reported feeling seven "earth tremors" on 21 September, and others in recent days. None of the events caused damage. The Solomon Islands Seismology Division does not have monitoring equipment on the island.

Geological Summary. Simbo is a small island in the western Solomons with three truncated andesitic volcanic centers. The only Potassium-Argon date (2.3 +/- 1 million years ago from Mount Patukio) suggests a Pliocene-to-Pleistocene age for the island (Solomon Islands Geological Survey, 1982). The southern half of the island is thermally active. It contains fault-related fumarolic areas and hot springs near saltwater Lake Ove along the western coast and along the eastern coast near Mount Patukio, which has a steep-walled summit crater. Grover (1955) noted native accounts of the explosive enlargement of the Ngusunu explosion crater along the SW coast of the island one to two generations prior to 1955, probably after a visit by Guppy in 1882. Press reports mentioned an eruption in the early 1900s that forced the evacuation of villages beside Lake Ove, immediately adjacent to Ngusunu crater.