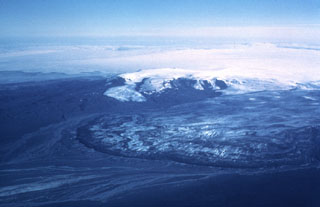 
On 15 August park rangers noted unusually high water in the Volgu River, which originates from a water-filled depression called Gengissig in a geothermal area of Kverkfjöll; the high water destroyed a walking bridge. The next day an overflight of the area by members of National Commissioner of the Icelandic Police (NCIP), the Icelandic Meteorological Office (IMO), and the Institute of Earth Sciences revealed that Gengissig was empty and that a phreatic explosion had deposited streaks of dark material on the rock and snow.

Geological Summary. Kverkfjöll is a large subglacial volcano at the NE end of the Vatnajökull icecap. Two elliptical ice-filled calderas, each about 8 x 5 km in size, have been identified. An associated fissure swarm can be traced 60 km to the NE. A half dozen ridges of subglacially erupted pillow lavas are now exposed and extend beyond the glacial icecap to the NE. Subglacial historical eruptions have been recorded since the mid-17th century. Several other historical eruptions once attributed to Kverkfjöll are now thought to have originated from Bárdarbunga volcano to the west.