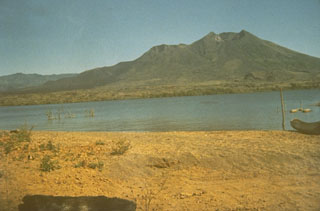 
CVGHM reported increased seismicity from Batur from September to 7 November and a significant increase in the number of volcanic earthquakes on 8 November. The Alert Level was raised to 2 (on a scale of 1-4).

Geological Summary. The historically active Batur is located at the center of two concentric calderas NW of Agung volcano. The outer 10 x 13.5 km wide caldera was formed during eruption of the Bali (or Ubud) Ignimbrite about 29,300 years ago and now contains a caldera lake on its SE side, opposite the satellitic Gunung Abang cone, the topographic high of the complex. The inner 6.4 x 9.4 km wide caldera was formed about 20,150 years ago during eruption of the Gunungkawi Ignimbrite. The SE wall of the inner caldera lies beneath Lake Batur; Batur cone has been constructed within the inner caldera to a height above the outer caldera rim. The Batur stratovolcano has produced vents over much of the inner caldera, but a NE-SW fissure system has localized the Batur I, II, and III craters along the summit ridge. Historical eruptions have been characterized by mild-to-moderate explosive activity sometimes accompanied by lava emission. Basaltic lava flows from both summit and flank vents have reached the caldera floor and the shores of Lake Batur in historical time.