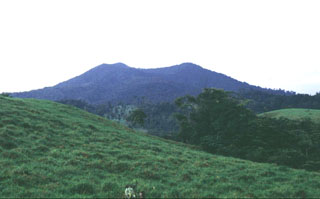 The Aguas Zarcas group of nine basaltic scoria cones is located on the northern flank of the Platanar-Porvenir complex. These cones lie 10-17 km behind the volcanic front of Costa Rica. The Platanar summit crater is to the upper right of this photo taken from the south. Holocene lava flows are on the western flank. The Viejo-Porvenir complex is seen here rising above farmlands NE of the massif. The Viejo peak is on the left and Porvenir on the right.